He’s taking the night out of nightlife.

Gov. Andrew Cuomo is being sued by a Brooklyn watering hole for forcing New York City restaurants to close at midnight once limited indoor dining takes effect at the end of the month.

“Coronavirus does not behave as a vampire, infecting others only when the moon is out,’’ seethes the lawsuit filed by The Graham tavern in Williamsburg on Monday.

“The requirement of an earlier closing time actually helps coronavirus to spread,’’ the Brooklyn federal suit contends. “This is because a ‘food curfew’ is likely to cause many who would have gone to get food after midnight to do so before midnight, thus making the hours before midnight more crowded.”

The popular Meserole Street nightspot said Cuomo has already been killing city establishments with his “constantly changing and unworkable rules’’ — which lead to “hyper-technical violations’’ and thousands of dollars in fines.

Now, on top of the myriad of other ongoing health-related restrictions, eateries must soon deal with a “midnight closing time … chosen arbitrarily by Cuomo,” the court papers say.

The governor announced Sept. 9 that city restaurants could finally start indoor dining Sept. 30 after six months of restrictions — but only at 25 percent capacity and with the curfew, among other rules.

“No study of which Plaintiff can find has suggested that indoor coronavirus transmission is greater during the evening than during the day,’’ argues the suit filed by the tavern, which is operated by Columbus Ale House, Inc.

“No study of which Plaintiff can find has suggested that a city that implemented an earlier restaurant closing time saw fewer infections as a result.”

Yet The Graham and other food establishments already “desperately struggling to pay [their] rent’’ because of debilitating rules have to deal with the 25 percent indoor-dining capacity — and a curfew on top of that, forcing them “to boot customers out the door,” the suit says.

“Without the [curfew], The Graham would stand a chance of being able to pay its bills; with [the restriction], it will be a matter of months before The Graham will be forced to permanently close its doors,” the court papers say.

The suit seeks an overturning of the curfew and lawyers’ fees, among other things.

SEOUL, South Korea — South Korea said Tuesday that a government official slain by North Korean sailors wanted to defect, concluding that the man, who had gambling debts, swam against unfavorable currents with the help of a life jacket and a floatation device and conveyed his intention of resettling in North Korea.

Senior coast guard officer Yoon Seong-hyun said at a televised briefing that there was a “very low possibility” that the man could have fallen from a ship or tried to kill himself because he was putting on a life jacket when he was found in North Korean waters last week.

Yoon said tidal currents at the time would also make it extremely difficult for him to drift into North Korean waters naturally.

The coast guard said its assessment was based on an analysis of tidal currents in the area, a visit to a government boat the official had been aboard before his disappearance, investigation of his financial transactions and a meeting with South Korean Defense Ministry officials.

Yoon said the man conveyed his wish to defect before his death. He cited intelligence showing North Korea knew the man’s name, age, height and hometown as an evidence of his communication with the North.

Yoon didn’t elaborate. But some experts said he likely was referring to South Korea’s interception of communications among North Korean officials about the man.

Coast guard officials have previously said the 47-year-old official was a father of two with some debts. Yoon said Tuesday the debts totaled about 330 million won ($282,240), 80% of which were from gambling.

It’s still unclear whether Tuesday’s announcement would sooth mounting questions about why the man was in North Korean waters. The brother of the late official has said it was more likely that he fell into the sea by accident. The official had been aboard a government inspection ship before he disappeared.

South Korea has accused North Korea of having fatally shot him and burning his body. North Korea acknowledged that its troops killed him because he refused to answer to questions and attempted to flee. But North Korea said its troops only burned the man’s floatation device.

North Korean leader Kim Jong Un has offered a rare apology over the man’s death, but his government hasn’t confirmed the man was trying to defect.

The man’s shooting has triggered a huge political firestorm in South Korea, with conservatives launching fierce political attacks on liberal President Moon Jae-in, who espouses greater ties with the North.

House Democrats on Monday night unveiled a scaled-down $2.2 trillion coronavirus aid package in an attempt to revive long-stalled talks with the Trump administration on the measure.

The package, $1.2 billion less than the version that passed the lower chamber in May, would include a second round of $1,200 checks to most Americans and bring back a $600-a-week jobless benefit.

Talks between the two for a new measure have never gained steam, but House Democrats hope the latest proposal will bring White House negotiators back to the table.

“We’ve come down $1 trillion, and they need to come up because we have to crush this virus,” Pelosi said Monday on MSNBC.

Though their newest package was substantially slashed, it’s still far above the $650 billion to $1 trillion range Senate Republicans are aiming for.

Monday’s proposal would send $436 billion to state and local governments, $225 billion to colleges and universities, and deliver another round of subsidies to businesses under the Paycheck Protection Program.

In Sonoma County, residents of the Oakmont Gardens senior living facility in Santa Rosa boarded brightly lit city buses in the darkness overnight, some wearing bathrobes and using walkers. They wore masks to protect against the coronavirus as orange flames marked the dark sky.

The fires that began Sunday in the famed Napa-Sonoma wine country about 45 miles (72 kilometers) north of San Francisco came as the region nears the third anniversary of deadly wildfires that erupted in 2017, including one that killed 22 people. Just a month ago, many of those same residents were evacuated from the path of a lightning-sparked fire that became the fourth-largest in state history.

Sonoma County Supervisor Susan Gorin evacuated her property in the Oakmont community of Santa Rosa at about 1 a.m. She is rebuilding a home damaged in the 2017 fires.

“We’re experienced with that,” she said of the fires. “Once you lose a house and represent thousands of folks who’ve lost homes, you become pretty fatalistic that this is a new way of life and, depressingly, a normal way of life, the megafires that are spreading throughout the West.”

More than 68,000 people in Sonoma and Napa counties have been evacuated in the latest inferno, one of nearly 30 fire clusters burning across the state, said Cal Fire Division Chief Ben Nichols.

In Napa County, the entire town of Calistoga, population around 5,000, was ordered to evacuate Monday evening.

Many more residents have been warned that they might have to flee, even though winds eased significantly Monday afternoon, giving firefighters an opportunity to make some progress, he said.

“The smoky skies that we’re under are a sign that there’s not a lot of air movement out there moving the smoke around,” Nichols said at an evening briefing. “Not good for air quality, and folks outside exercising, but great for us to work on containing this fire and working on putting it out.”

The Glass Fire broke out before 4 a.m. Sunday and merged with two other fires to scorch more than 56 square miles (145 square kilometers) as of Monday. There was no containment. Officials did not have an estimate of the number of homes destroyed or burned, but the blaze engulfed the Chateau Boswell Winery in St. Helena and at least one five-star resort.

Logan Hertel of Santa Rosa used a garden hose to fight flames at a neighbor’s house in the Skyhawk neighborhood until firefighters could relieve him.

“Seems like they got enough on their hands already. So I wanted to step in and put out the fire,” Hertel said.

Dominic Wiggens, who lives in the same neighborhood, evacuated but returned later Monday. His home was still standing, but many others were gone. “It’s so sad,” he said.

Pacific Gas & Electric was inspecting its equipment as it sought to restore power to more than 100,000 customers who had it turned off in advance of gusty winds and in areas with active fire zones. The utility’s equipment has caused previous disasters, including the 2018 Camp Fire that killed 85 people and devastated the town of Paradise in the Sierra Nevada foothills.

More than 1,200 people were also evacuated in Shasta County for the Zogg Fire, spread over 23 square miles (59 square kilometers) by Monday.

Shasta County Sheriff Eric Magrini said three people died as a result of the fire, though he gave no details.

“It’s with a sad heart that I come before you today,” he said, urging residents to heed advice to leave. “When you get that order, evacuate immediately. Do not wait.”

Residences are widely scattered in the forested area in the far northern part of the state. The region was torched just two years ago by the deadly Carr Fire — infamously remembered for producing a huge tornado-like fire whirl.

The causes of the new fires were under investigation. 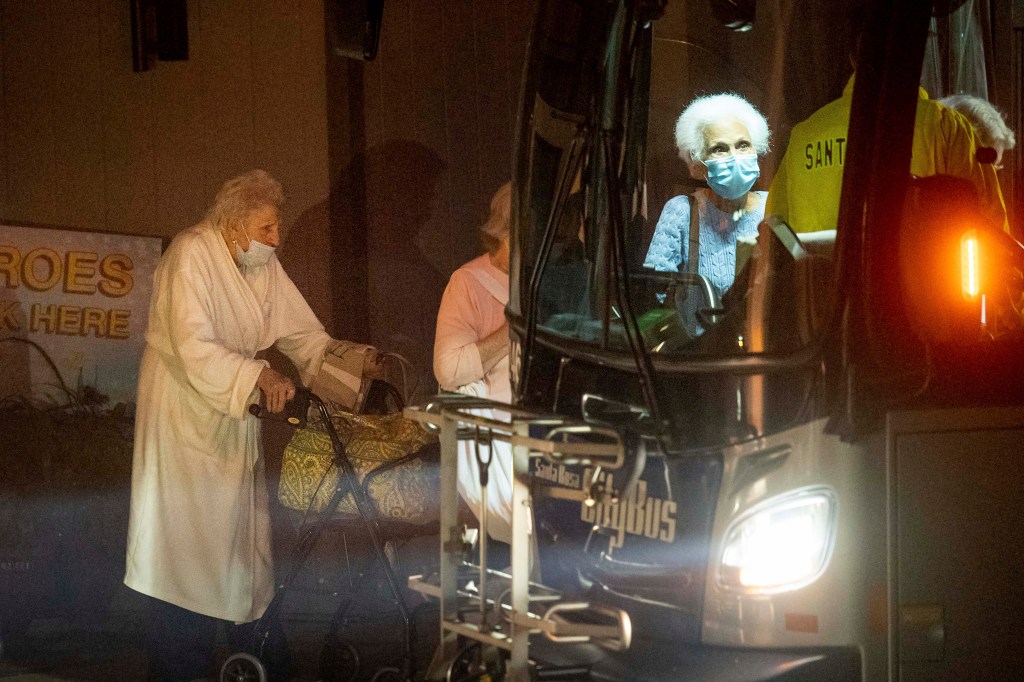 The last time Aroldis Chapman stood on a postseason mound,…

Mark Ghilarducci, director of the Governor’s Office of Emergency Services, said 2020 has been challenging.

“The silver lining to it is that people who live in California become more prepared, they’re more aware, they know these events take place and we’re seeing a citizenry that does get it and is working hard to be prepared,” he said.

Numerous studies in recent years have linked bigger wildfires in America to climate change from the burning of coal, oil and gas. Scientists say climate change has made California much drier, meaning trees and other plants are more flammable.

The latest fires erupted as a giant ridge of high pressure settled over the West, producing powerful gusts blowing from the interior toward the coast while slashing humidity levels and raising temperatures.

Most of the losses occurred after a frenzy of dry lightning strikes in mid-August ignited a massive outbreak of fires.

Fire worries were developing across Southern California, although it was unclear how strong the predicted Santa Ana winds would become. Heat and extreme dryness were also expected to create problems.

Conditions were also hot, dry and windy in parts of Arizona, where the Sears Fire in Tonto National Forest north of Phoenix has grown to more than 14 square miles (36 square kilometers) since it erupted Friday. Authorities reported zero containment.