Democratic presidential nominee Joe Biden “welcomed” the signing of the “Abraham Accords,” which begin the normalizing of relations between the US and two Gulf countries in a deal spearheaded by the Trump administration.

In a statement released Tuesday, the former vice president praised the United Arab Emirates and Bahrain after they joined with President Trump to sign the historic accords.

“I welcome the United Arab Emirates and Bahrain taking steps to normalize ties with Israel. It is good to see others in the Middle East recognizing Israel and even welcoming it as a partner,” Biden said.

The Democratic presidential hopeful pledged that if he is elected, his administration would “build on” the Trump administration’s efforts.

“A Biden-Harris Administration will build on these steps, challenge other nations to keep pace, and work to leverage these growing ties into progress toward a two-state solution and a more stable, peaceful region,” the statement read.

On Tuesday, Trump hosted Israeli Prime Minister Benjamin Netanyahu alongside the foreign ministers of the UAE and Bahrain on the White House South Lawn to affirm their recent recognition of Israel’s statehood.

Bahrain and the UAE are the third and fourth Arab countries to establish diplomatic relations with Israel. The breakthrough also established direct commercial flights between Israel and the UAE.

Documents signed at the event — with a witness signature from Trump — commit Israel, the UAE and Bahrain to exchange ambassadors and open embassies.

They do not, however, address multiple major sticking points in the Israeli-Palestinian peace process, such as the final status of Jewish settlements in the West Bank.

Speaking to reporters and other attendees at the event, Trump said the countries will “cooperate as partners across the broad range of sectors, from tourism to trade and health care to security, they’re going to work together. They are friends.”

The Trump administration efforts on Middle East peace have been spearheaded by Jared Kushner, Trump’s son-in-law and a White House senior adviser.

Speaking to CNN Tuesday evening, he remarked of the deal, “Bringing the Arab countries together with Israel hopefully marks the beginning of the end of the Arab-Israeli conflict. I think it removes a huge psychological barrier.”

Bestselling author Dan Brown says his publisher was thrilled that he cheated on his wife — because readers thought he was too boring.

“I called my publisher and said, ‘I’m so sorry, I hope this doesn’t impact sales,’” the “Da Vinci Code” author wrote in the Sunday Times of London about his ex-wife accusing him of having “sordid, extra-marital affairs.”

“He said: “Are you kidding? Everyone thinks you’re the most boring guy in the world … multiple affairs with beautiful women, finally there’s a story!” the 56-year-old writer said.

Without giving details, Brown wrote that he “met someone else” near the end of his marriage to Blythe Brown “when we were each looking for comfort in other places.”

“She’s hurt. I get it, and I’ve apologized,” he said, saying that his ex got “half of everything and more money on top” in the divorce.

“But it’s not enough. So here we are,” he said of her June lawsuit in which she accused him of secretly siphoning off vast sums of money to conduct his “sordid” dalliances.

Martians may exist — and be living on lakefront property.

New research shows that the Red Planet may actually have liquid water in salty lakes under its polar ice cap — thus giving a place for life to develop, according to a report.

The bodies of water, if confirmed, would be similar to the subglacial lakes that exist on Earth, beneath the Antarctic and the Greenland ice sheets, where, despite the cold, bacterial life exists, NBC News reported.

“We are much more confident now,” lead researcher Elena Pettinelli, a professor of geophysics at Italy’s Roma Tre University, told the network. “We did many more observations, and we processed the data completely differently.”

If the study, published Monday in the journal Nature Astronomy, is verified, it would mark the first time liquid lakes were found on Mars.

Scientists have long speculated that — just as Earth’s subglacial lakes are filled with bacterial life — something similar might be the case in liquid reservoirs on Mars.

Pettinelli, a planetary scientist, and her team reviewed 134 ground-penetrating radar observations taken from the Mars Express Orbiter between 2012 and 2019 — more than four times as much data as before and taken during a time period more than twice as long, NBC reported.

They used two techniques to review their findings — one already applied for the 2018 study, and a newer one that has been used to find lakes beneath the Antarctic ice sheet.

Recurrent Slope Linae on the Palikir Crater walls on Mars 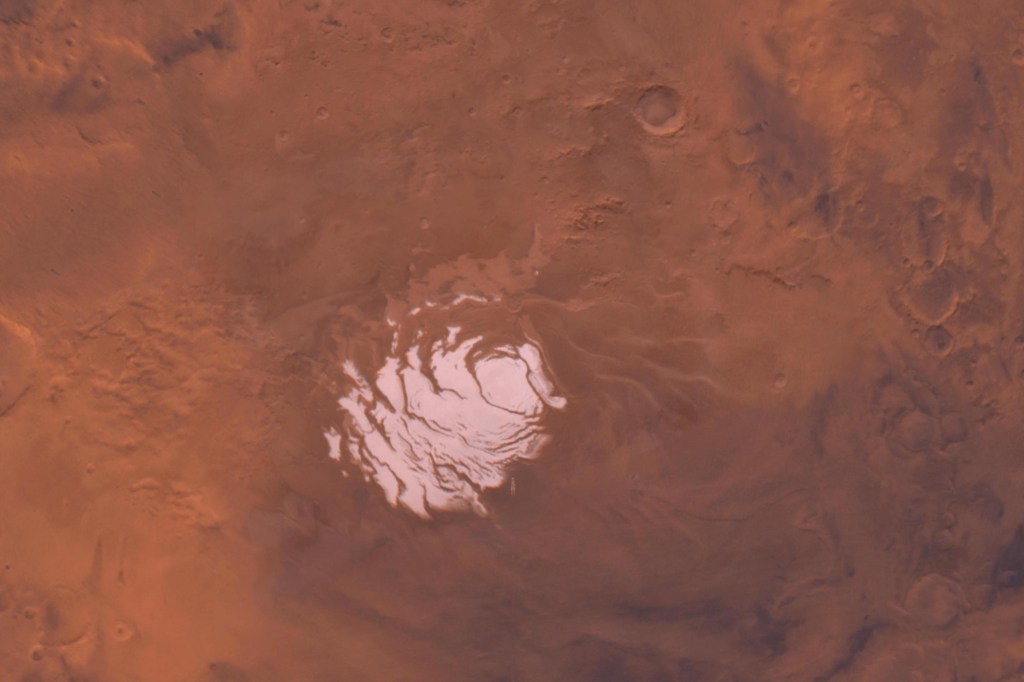 The San Francisco Giants fell just short of qualifying for…

Both methods point to a “patchwork” of buried reservoirs of liquid on Mars — a large reservoir about 15 miles across, coupled with several smaller patches up to 6 miles across, Pettinelli said.

The reservoirs begin about a mile below the surface, though the researchers can’t tell how deep they are, she added.

Two other scientists who were not involved in the study cast doubt on the results — one suggesting that the underground body of water seems plausible, but it might not be as cold or salty as the researchers believe, according to NBC.

Another suggested that Mars is much too cold for even the saltiest water to exist in liquid form.

“If we apply the same interpretation, then there should be springs flowing out along the edge of the polar cap,” planetary scientist Jack Holt of the University of Arizona’s Lunar and Planetary Laboratory in Tucson, said in an email to the network. “And that is not the case.”

The research was published only weeks after astronomers pointed to a potential sign of life on Venus.

Queens voters wrongly getting mail-in ballots marked for military use

Voters across Queens have received mail-in ballots for the 2020 presidential election marked for military use despite never having served in the armed forces — raising the specter that if mailed in, those votes could be challenged in court post-election.

“I believe that’s just the tip of the iceberg,” said City Councilman Jimmy Van Bramer, referring to the roughly dozen constituents in his Sunnyside district who have reached out to him about receiving the ballots. “It appears that everyone has gotten this particular ballot.”

Van Bramer, a Democrat, said the issue only adds to the worries in an already topsy-turvy election cycle that has seen an inordinate number of voters look to mail-in voting with the coronavirus pandemic raging on.

Van Bramer said he was informed by the city BOE that the issue stemmed from a typographical error, wherein a dash meant to separate the words “absentee” and “military” was dropped.

“This apparent typo just has everyone confused and believing these are invalid ballots,” he said. “It’s absolutely outrageous that when everyone is watching them, they still screw up the most basic thing, which is printing the ballot correctly.

“Did no one proof this?”

A spokeswoman for the city BOE confirmed that the punctuation was dropped, but insisted the ballots would be fully counted and that mail-in voters in all five boroughs should expect similar forms.

“It is [both] absentee and military,” said Valerie Vazquez. “It is the same ballot.”

However, a court challenge of ballots after Nov. 3’s Election Day could put the votes at risk of ultimately not being counted.

Doug Kellner, co-chairman of the state Board of Elections, was not pleased about even the possibility of confusion.

“I’m not happy about this,” said Kellner, who vowed an inquiry into the matter. “There are lots of questions of whether there is adequate quality control [at the city BOE].”

The body has previously caught flak from the White House on its handling of mail-in balloting for June’s primary contests, which were widely seen as a test run for remote voting’s viability in November.

President Trump in particular has voiced significant concerns about the security and expediency of mail-in voting, and Democratic challenger Joe Biden has reportedly bolstered his legal staff for a potentially bitter and protracted legal battle over possible hinky ballots.