Roman Reigns has been making quite an impact on social media since his return. WWE fans did not expect “The Big Dog” to show up, months after being absent. However, he seems to have laid down a huge shocker by siding with Paul Heyman.

This isn’t the only time Reigns has absolutely stunned us. Here is a list of the top ten most unexpected “Big Dog” moments.

One of the most notorious teams to ever enter the ring – Reigns, Seth Rollins, and Dean Ambrose (now Jon Moxley), took the WWE Universe by storm.

On their debut, they started with a bang by ruthlessly Powerbombing Ryback through the commentary table.  This was as big a statement as they could have made, and the Powerbomb became a signature move that we would see plenty of times after this.

The bigger they are, the harder they fall. Roman Reigns had totally finished off Mark Henry. “The World’s Strongest Man” barely made it to his feet outside the ring before the unthinkable happened. 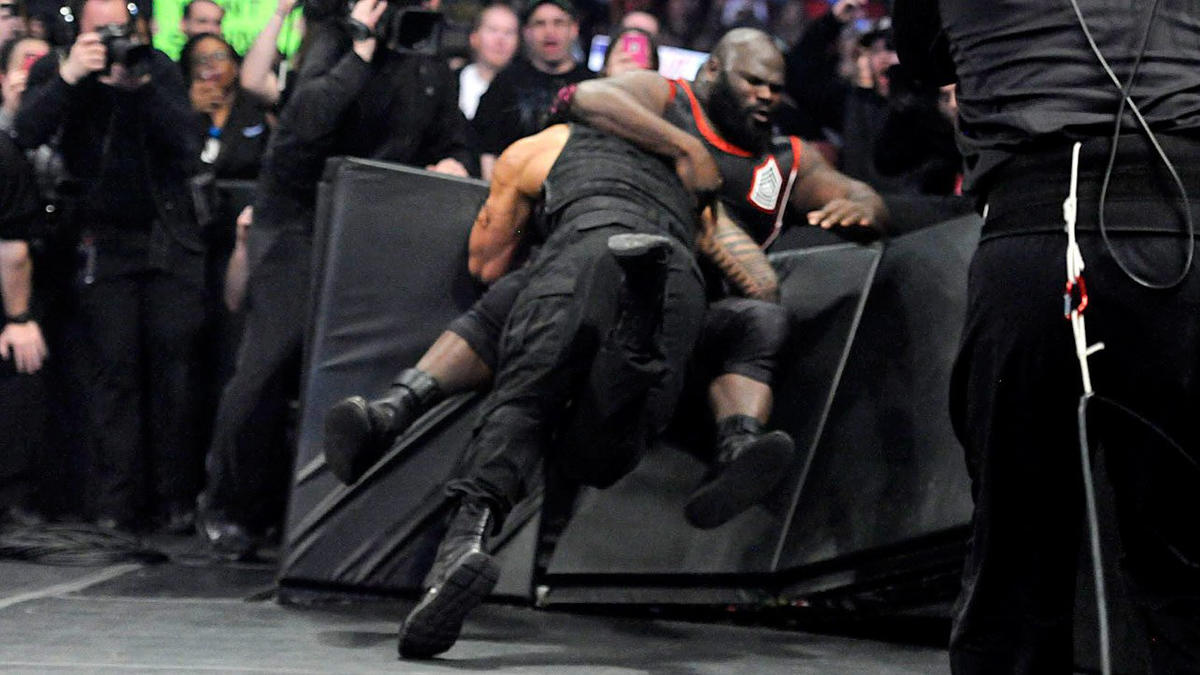 Starting a small jog, Reigns gathered his momentum from the other side of the ring and sprinted towards Henry.

He made contact with the big man with a devastating Spear, sending him through the barricade. The impact was phenomenal, and Henry was probably never the same after that.

Defying the authority of Triple H, Roman Reigns and The Shield wanted blood. They wanted to wage war against a reunited Evolution.

Triple H tried to be the Peacemaker and prevent an all-out war between the two biggest groups in WWE then. However, he got caught in the crossfire instead.

As soon as Triple H let his guard down, Reigns delivered a short-ranged spear on “The Game”, and war was declared. 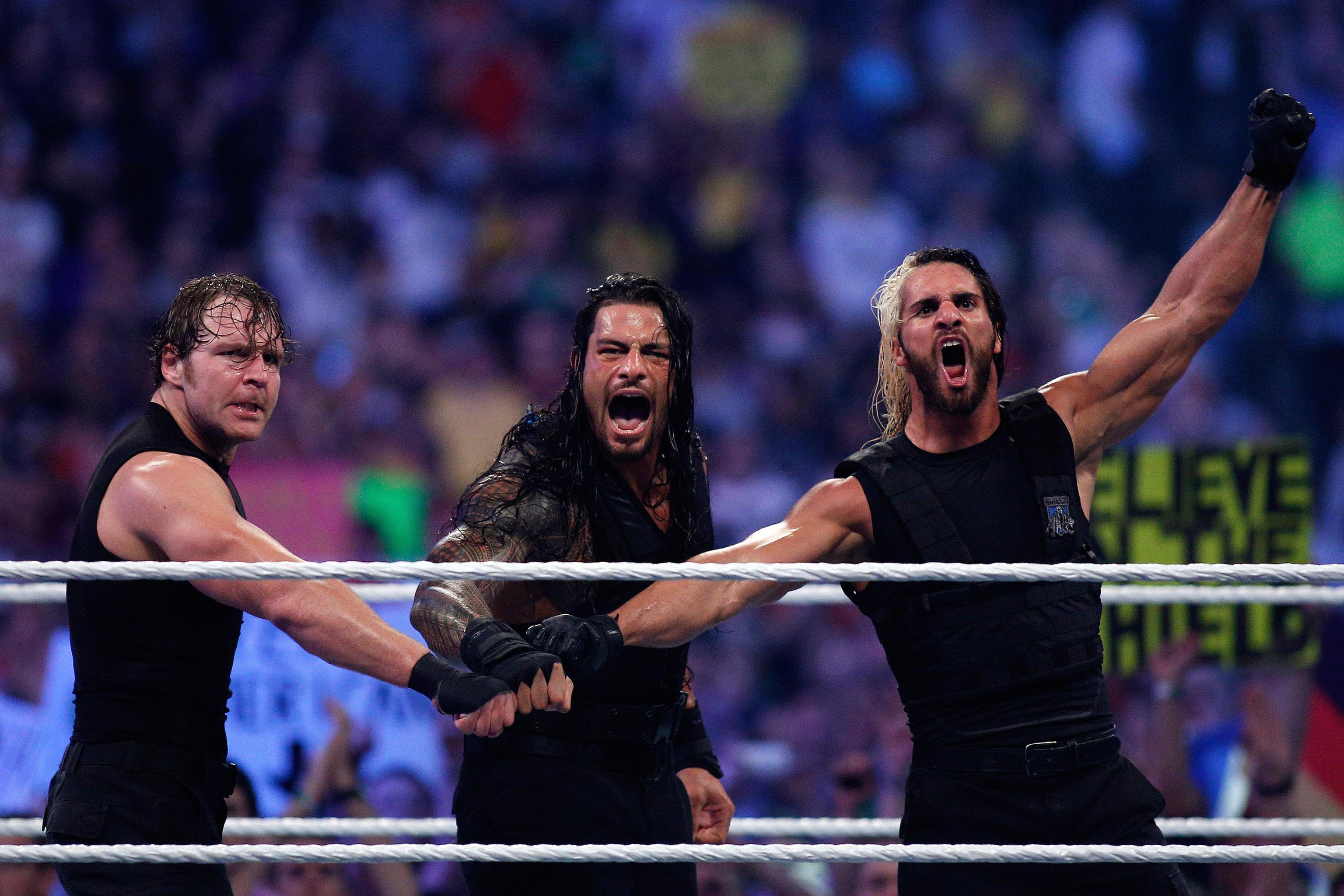 Batista and Randy Orton attacked, but the two were beaten back by Rollins and Ambrose, who stayed in the ring, asserting their dominance.

Bobby Lashley had a problem with Roman Reigns and wanted to give him a piece of his fist. However, he was restrained by the entire Raw roster.

To Reigns, Lashley was now just a tiger in a pit. Exploiting the opportunity, Reigns quickly gained momentum and made a huge jump over the top rope to land directly on the entire roster.

All the Superstars were taken out, and Reigns was the last man standing. No one can make a bigger statement than that.

This was probably one of the most satisfying moments in WWE History. Roman Reigns was in the middle of his feud against Triple H at WrestleMania 32 when Stephanie McMahon intervened. 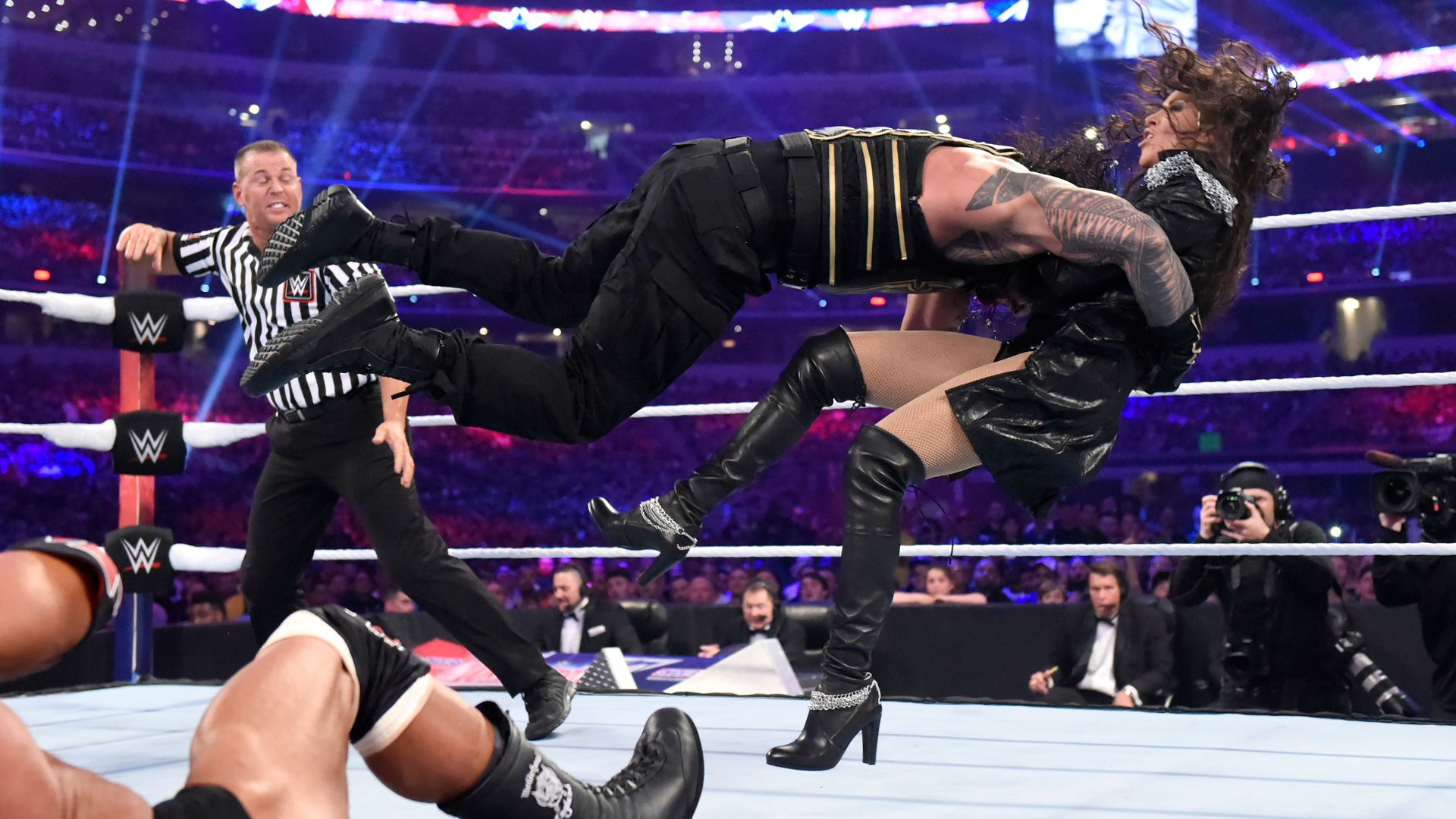 Seeing that Reigns was about to deliver a Spear, Triple H instinctively moved out of the way. However, Stephanie wasn’t as quick and got caught with a thumping Spear. Judging by the look on her face, she didn’t know where she was!

Roman Reigns would go on to win that match and regain the WWE Championship for the third time, killing two birds with one stone.

5. Spearing Braun Storwman off the Stage

Braun Strowman thought he was invincible, but he had not met Roman Reigns.

In their huge match, Roman Reigns took the fight with Strowman outside the ring. The brawl led up to the entrance stage, and Reigns had Strowman just where he needed him.

Unable to even move his arms properly, Strowman could only watch as Reigns came charging towards him to deliver a crushing Spear. 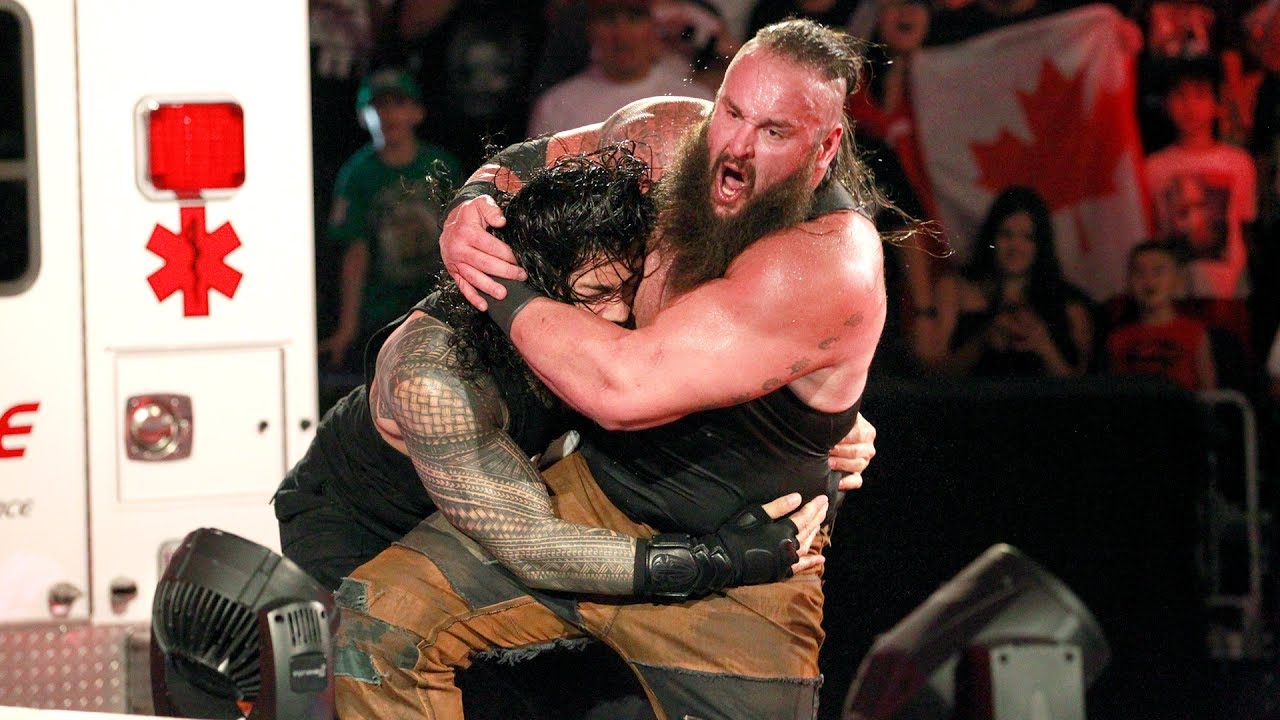 The Spear sent the two Superstars off the stage, crashing through the table. The match was inconclusively ended after this, as both men were incapacitated.

Roman Reigns had a series of matches with Brock Lesnar, and in this one, he truly showed Lesnar the meaning of ‘hell in a cell.’

Catching “The Beast Incarnate” at a perfect angle, wedged between the ropes and the cage, Reigns delivered a huge Spear, which broke that section of the cage. 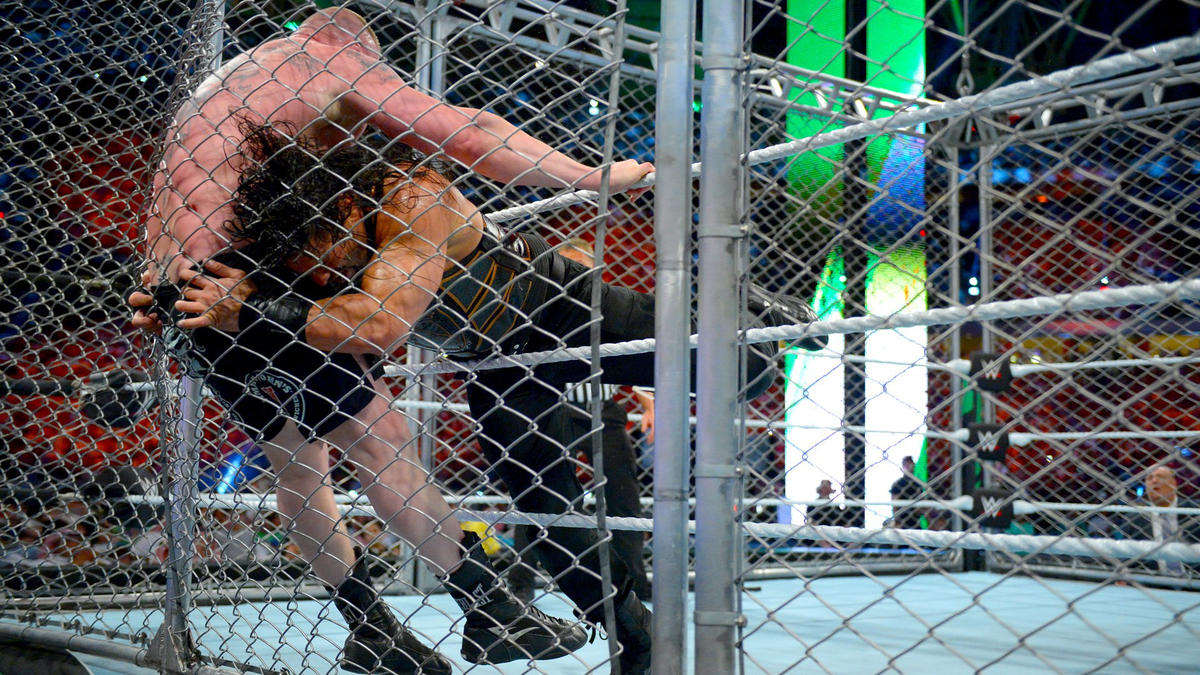 Brock Lesnar was annihilated with that Spear but would retain his title. Since he was the first to touch the ground, the officials decided that Lesnar had won.

It was a very bitter victory, as Reigns got the final statement in the end.

There’s only a select number of Superstars who can stick it to the boss, and one of them is Roman Reigns.

When Reigns had a match against Sheamus, Vince McMahon tired to stall things by interfering with the official. Deciding that McMahon was being too annoying, Reigns jumped up to deliver a big Superman Punch to the Chairman of the company.

I bet Mr. McMahon isn’t going to be interfering with Roman Reigns anytime in the future.

2. Giving Strowman his own medical attention

At the end of their huge match at ‘Great Balls of Fire,’ Strowman managed to send Reigns into the ambulance and win the match.

Reigns was not having any of it and Speared Strowman. He then threw the beast into the ambulance and drove the vehicle in a speedy reverse and crashed it into another truck!

We can only imagine Storwman’s point of view in that carnage. Either way, he never had a good relationship with trucks.

The most shocking moment undoubtedly belongs in the happy hands of Paul Heyman. Roman Reigns surpassed the entire WWE Universe by siding with Heyman.

Signing a new contract with him, Reigns will now be a bigger force than ever before. We will soon see just how big Paul Heyman can make Roman Reigns if he isn’t already one of the best.

Something tells me Roman Reigns will continue to shock, and there’ll probably be a lot more numbers in this list after the next few months.

The NFC East will come down to this